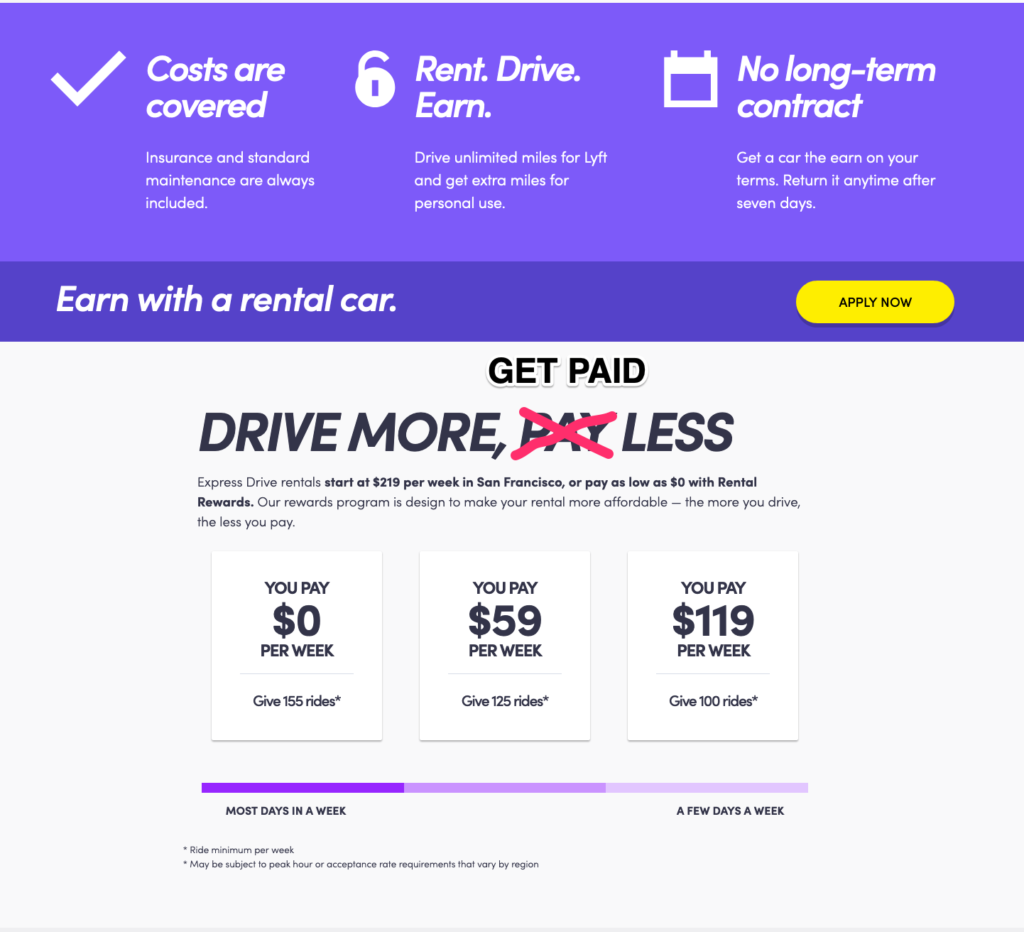 What Does That Even Mean?

To put the pay cut into a more intuitive context, a trip from downtown Sacramento to the Sacramento International Airport now comes in at $7.16 for those using an Express Drive rental. That same trip would net $9.05 for Lyft drivers who bring their own car.

That’s about a 20% difference in pay! This seems to be part of a separate, larger, trend in ridehail where the TNC’s are obscuring driver pay and charging/paying customers differently based on their algorithms predictions.

In this situation however, Lyft is paying it’s most desperate drivers less money and making it difficult for them to save enough enough money to get ahead and out of their rental.

Oh yeah, Lyft doesn’t tell anyone signing up for Express Drive that they’ll be getting paid less than other drivers. So there’s a pretty good chance that people who signup through there page won’t even learn about these separate pay rates until they’re sitting behind the wheel of their rental:

You should also definitely checkout Johana Bhuiyan’s (better) article in the Los Angeles Times covering Express Drive and how it affects drivers. Aside from scooping my post, she really digs much deeper (2500 words deeper) into Express Drive taking a lot of care to tell the story of drivers who have these rentals who are just trying to work and get ahead.

Man, her article really kicked my posts a**

You now need a receipt to collect a flat rate cleaning fee on Uber.

This kind of sucks because some drivers clean up the mess themselves (even the puke) and then pocket the fee.

This makes sense for drivers who want to cut down on cleaning time and costs while getting some compensation for having to get off the road to clean their vehicle. Now if someone throws up in my vehicle in the evening, I’’ll be forced to clean it myself before the smell takes hold and have a much harder collecting any cleaning fee in the process.

If this happens to you, I suggest taking an image before you clean things up. Then clean the mess up the best you can and try to leave your windows down over night. From there, take it to a cleaner and have the carpets shampooed. Otherwise the smell will linger forever.

Lyft Is Rolling Out “Personal Primetime Zones” To More Drivers

By now, many drivers are already on this program. However it looks like this is rolling out to everybody pretty soon. I’ll have more on Personal Primetime later this week but if you haven’t gotten this rollout yet, you should know that these zones replace classic Primetime and work like this instead:

Under this scheme, the classic pink heat maps you are used to seeing get replaced with “demand” maps that show where there is demand for rides (but not Primetime, at least not for you).

If this looks familiar, it’s because it’s Lyft’s answers to Uber’s New Surge that replaces Surge multipliers with fixed dollar amounts within fixed zones. The obfuscation of the Surge allows Uber and Lyft to more easily manage their fleet of drivers while providing more control over the “take” rate between passengers and drivers.

You’ve probably heard by now that Uber is allowing passengers to customize their UberBLACK trips by selecting a “quiet preferred” option on their trips. It’s gotten mixed reception from drivers with some saying it dehumanizes them while others, I would say most, pointing out that they don’t really want talk to their passengers either.

What’s been glossed over (although Andrew Hawkins includes it in this article) is that passengers can also select other options like temperature preference, ask for extra waiting time, or for assistance in loading their luggage.

Personally, I like these features because they refuse friction during the pickup process where I usually have to “read” whether or not my passenger want to talk, listen to music, deal with windows up/down, etc. It would genuinely be much easier for me as a driver if I could just know all of that before picking up passengers.

These customization options could also potentially be a way to sell “extras” that can be used to strengthen driver earnings. I’ll have a whole article up tomorrow all about my ideas for this since I think it’s likely a bunch of ex-airline industry types are working at ridehail companies now.Maybe one day you’ll have to pay $25 to check more than a carry-on in your Uber 😉

The tax man may be coming for Uber and Lyft drivers

The headline to this article is a little scary but this story by Shawn Zeller is important because it shows the IRS is starting to eye the taxes of ridehail drivers with a heavier interest. This probably won’t be the last we hear about the IRS taking a look at ridehail and gig-economy operators.

“As a means of cracking down, the legislation would force Uber and Lyft to report to the IRS any amount driver contractors earn over $1,000 in a year, rather than the current $20,000.

The $20,000 threshold is likely responsible for “billions of dollars in potential tax discrepancies,” said J. Russell George, the Treasury Department’s inspector general for tax administration, in testimony before the House Ways and Means Committee this month.”It probably makes sense to close the loophole though. The companies don’t get punished for NOT reporting this income and Uber already reports it anyways. Otherwise more drivers will just run afoul of the IRS when they get audited and the only people that will suffer are drivers who did

I’ve seen several different versions of this story over the last week. Several media outlets (local media in particular) have been talking about this study by an insurance company called Netquote that found rideshare vehicles have 6,055,963 Colony Forming Unit’s (CFUs) of bacteria while a rental vehicle had 2,000,510 and Taxi’s had only 27,593 CFU’s.

Here’s the only thing you need to know about this study:

“The Netquote study only examined three rideshare vehicles, three taxis and three rental cars, meaning it’s not a scientific examination of the issue.”

Until we get better data, I think this study is just clever content marketing coupled with an effective publicist.

A Texas congressman drove for Uber during a legislative recess. Here’s what he learned

Let’s end today with a positive story from Business Insider from Graham Rapier.

US Rep. Marc Veasey from Texas works lots of odd jobs between sessions of Congress. Recently, he spent a lot of his time driving around and meeting constituents as their Uber driver.

Additionally, “he’s also worked for FedEx, a firehouse, and hotels. Uber, however, was his first taste of the massive and quickly growing gig economy.”

Say what you will about politicians, this is one of the few who have gotten behind the wheel to understand what we’re going through.

That’s already more than most of the people trying to influence the law on behalf of drivers.

Would be cool to interview him here and talk policy for drivers!