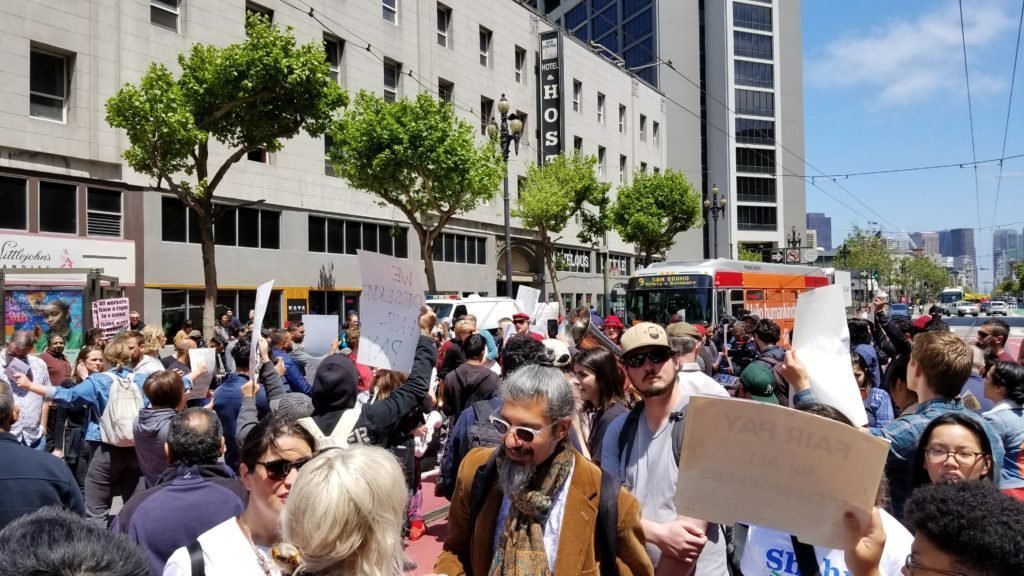 I went to the Gig Workers Rising protest in front of Uber Headquarters today that was part of a day of national protests for Uber drivers. As I approached Uber HQ from Civic Center BART I noticed the crowd consisted of a wide-variety of people. Ridehail drivers, labor advocates, passengers, a couple of cops, union members, a few homeless people yelling (this is SF), a ton of protestors yelling (this is SF), the media, and perhaps most importantly; a Brass Liberation Orchestra (because this is SF).

Over the last few years I’ve watched several driver protests flop. The protests I’ve attended almost always end with a group of angry ridehail drivers standing in a circle in a parking lot yelling at each other as they point their vape pens aggressively into the air. This wasn’t one of those protests though. Things seemed different to me right from the start. Even though it wasn’t a blowout in attendance.

By my estimate there were between 300 and 500 people protesting in front of Uber HQ. Far more than I’ve seen at any other driver protest. Additionally, several drivers circled the block and honked their horns repeatedly to encourage those protesting on the sidewalk. Drivers in the crowd yelled louder with every honk of the horn. Like an Uber Driver mating call of sorts.

300 to 500 people may seem kind of small when you consider there are more than 45,000 ridehail drivers in San Francisco. Although, most of the drivers I spoke outside of the event chose to protest by staying home and logging off the app. Eventually the 3-500 drivers and protestors entered Market Street as the police closed the block down to traffic (the crowds were nice enough to let MUNI through). The street was closed for about an hour as protestors did their protesting and several organizers and public officials gave speeches denouncing the treatment of ridehail drivers.

Perhaps what surprised me most though were the protestors who don’t drive at all.

This Was A Little More Organized

The organizers behind these protests are far more seasoned than those of previous driver protests. They are almost all progressives coming from various organizations like Working Partnerships USA, Tech Workers Coalition, and other organizations. They seem armed with the experience and tools to launch these kind of driver actions.

This seems to be slowly culminating into a budding infrastructure capable of organizing ridehail drivers that has never existed before. Email and text lists are being built. Press releases are getting written and distributed. Someone organized the brass band, the food truck, the shuttle buses in LA, etc.

They also coordinated all of this well-enough to launch multiple actions in multiple cities with multiple driver organizations.

Can you imagine drivers coordinating a protest like today even just a year ago? I can’t.

So it seems now that people are starting to do the actual work of organizing ridehail drivers.

Uber says they have 750,000 drivers. Lyft says they have 1.4 million. Obviously these numbers have been manipulated by the companies (why does Lyft pretend to have more drivers than Uber?) but there are also several hundred thousand gig-workers at Amazon, DoorDash, Wonolo, and other on-demand platforms. I think I can conservatively say they are at least 3 million app-based workers in the US.

That’s a big political constituency to win if you are running for office. Bernie Sanders has tweeted 3 times now in support of ride-hail drivers. He’s even made a campaign ad directed at Uber drivers:

Uber is not a poor company. It paid its top five executives $143 million in compensation last year, including $45 million to its CEO.

So why are Uber drivers struggling to put food on the table?

I stand with striking Uber and Lyft drivers today. The greed has got to end. pic.twitter.com/4esvwHApjX
— Bernie Sanders (@BernieSanders) May 8, 2019

I support Uber and Lyft drivers in their strike today as they say enough to unfair wages and mistreatment. Let’s all demand livable wages, better working conditions and job security for drivers and workers across the country.
— Cory Booker (@CoryBooker) May 8, 2019

Uber & Lyft are worth billions of dollars, but their business model depends, in part, on low wages for their drivers. I stand with ride-sharing workers who are organizing for better pay & benefits & the opportunity to bargain collectively. https://t.co/pmVAZUNDLW
— Elizabeth Warren (@SenWarren) May 8, 2019

This marks the first time I’ve seen politicians compete for the votes of ridehail drivers. It doesn’t matter what side of the aisle they vote on.

From here on out, people want our votes and THAT gives ridehail drivers a lot of power in of itself. As politicians begin to compete for ridehail drivers as a voting block there’s a pretty good chance we will see a lot more pressure put on Lyft and Uber. Additionally, it means that driver protests are no longer confined to drivers and other people are starting to get involved outside of the ridehail world.

Perhaps most importantly though, today showed that it is not impossible to organize drivers. Even if you saw a bunch of people driving today in the Uber app or little surge on the map. That wasn’t the point.