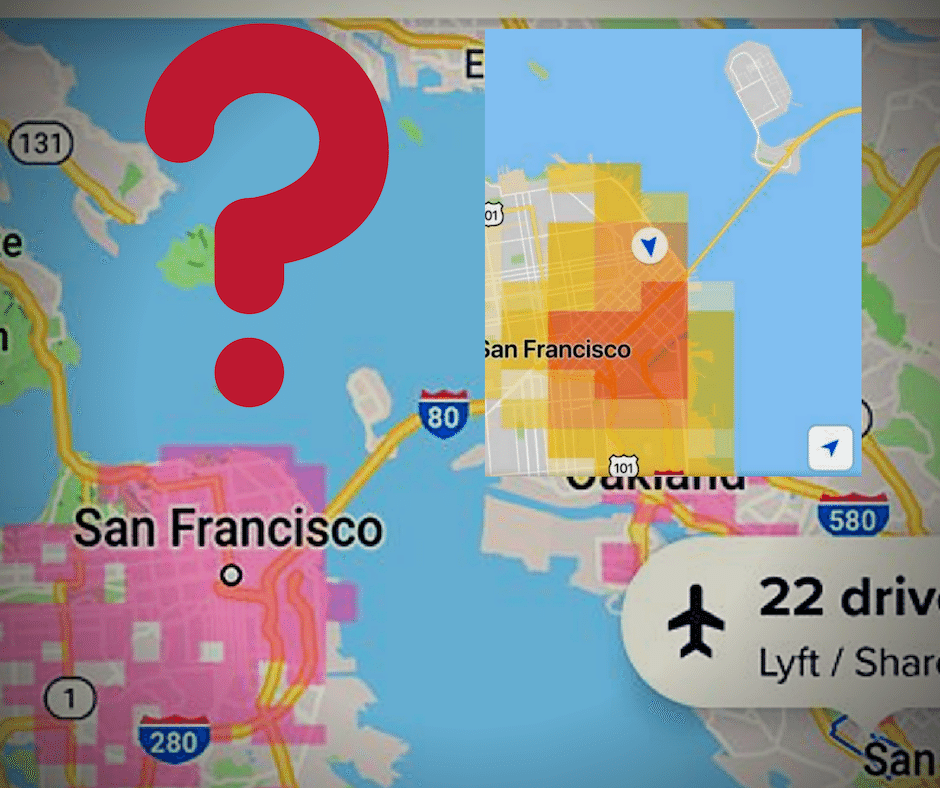 Aaron Gordon at Jalopnik wants your screenshots of flat rate surge. I would send examples from both Uber and Lyft if you have them and feel inclined to do so. Try to make sure they include the breakdown of what the passenger paid, what the driver received, and what Uber or Lyft received.

“If you drive for Uber, send us screenshots of your recent flat surge fares. We’re interested in the pricing information, not the location data or any other personally identifying features. If you choose to black out or crop the location information before sending, that’s fine, but please just let us know which city/market you’re in. In any event, we will ensure your anonymity on our end as well.You can send the screenshots to me directly at agordon@jalopnik.com or via Signal and WhatsApp at 646-402-3693.”

Lyft Is Doing This Too!

It rained today in SF. I opened my driver app running an older version of the Lyft driver app and got to see a ton of PrimeTime Pink in the driver map. Knowing not everyone was on this system, I asked some other drivers what they were seeing.

What Lyft Collects vs. What Lyft Pays Drivers When It’s Busy

The two images below are taken from separate driver apps in SF today ten minutes apart.

My Image (below): Notice SF is covered in pink. Indicating that if I get a request from there, it will pay Primetime (although I won’t know how much until the request comes in). This map shows roughly where and how much Lyft is collecting in Primetime.

I can still see this because I had not yet updated my Lyft Driver App and therefore had not been put on the new “Personal Power Zone” system yet.

Special thanks to Caner Özcan for the above picture.

This is from a driver at roughly the same time running an updated version of the Lyft Driver app. The yellow zones ONLY display demand. They DO NOT reward the driver with Primetime. Even though Lyft is charging Primetime to the passengers in this zone.

Lyft gets to pocket this difference.

A court case is going to force Uber to turn over data that the San Francisco City Attorney requested through a subpoena in 2017. Lyft complied with this request while Uber instead resisted San Francisco’s subpoena for the data in court. Now they have lost the appeal case against the subpoena.

The results of this case means that other cities in California can do the same thing and compel Uber (along with other TNCs) to hand over data on how Uber is affecting their cities in order to help them plan. SF wants this data in particular because SFMTA is confident that ridehail vehicles are responsible for increased gridlock.

Hopefully that planning will result in more places to legally and safely pickup passengers. Passenger zones will be needed if AV’s ever take off and they’ll definitely be needed if we keep driving

Are Uber and Lyft Drivers Gaming Surge Pricing to Protest Getting Screwed Over on Pay? (Gizmodo)

Yes?  Although many would still do that regardless of how much they get paid.

This has been floating around the news for the last week but basically a bunch of Uber drivers at the Reagan National Airport near Washington DC managed to get together and turn all of their apps off at the  the same time. Driving up surge to large dollar amounts and logging in at the same time to profit.

The local news got a hold of the story and ran it and the story went viral. Now Uber and Lyft have issued statements telling drivers along the lines of “don’t do that or you’ll get deactivated. probably”

Drivers have been trying to manipulate surge since the very beginning though. We haven’t seen much success because it does require coordinating a bunch of Uber drivers who often don’t hangout in the same place and talk to each other. I have seen drivers do this at smaller airports where it’s easier to coordinated however, this is the first time I’ve seen it work at a major airport.

Per CNN: “They just want your background check, that’s it,” Ali said. “If you apply tonight maybe after two days it will come, you know, everything.”

CNN has previously covered that Uber and Lyft have approved thousands of drivers who should have been disqualified because of criminal records. These background checks rely on the ability to scour public records, sex offender registries, DMV databases, and the like.

All of this depends on records existing in the first place.

Background check companies are OK at finding things if the person has lived their whole life in a place that keeps good records. However, every country keeps records a little differently. Some keep no records at all. And some will make fake records or records disappear for the right price.

Thing is, Background check data can’t really “reach” into things people have done say, while torturing people in Somalia during a civil war in 1988. Even when background check companies work in places like the US, they often turn up false or mixed data. They have mixed results.

IMO Background checks are worth about as much as a warranty on a box of Callahan brake pads. They mostly exist to make you feel safe and because they are perceived by the public to be better than nothing.

Anything I missed? Got any tips? Just hit the reply button!

The Third Man On The Road

Where Ridehail Driver Demonstrations Are Confirmed For May 8th