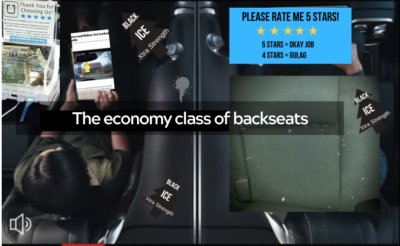 The Daily HBD returns this week with regularly scheduled programming. I have also setup some Google display ads on the site so if you want to avoid seeing display ads, make sure to subscribe to our newsletter.

I didn’t see a version of this advertisement for Uber X though so I went ahead and made one of my own:

Lyft is phasing out some cars from Lyft Lux.

Some drivers who purchased fancy cars for the chance of getting higher-paid rides on Lyft LUX will have to resign themselves to Lyft Classic and Shared Rides. Otherwise they will need to buy another fancy car that qualifies.

Moving forward, Lyft LUX will require vehicles on this list that are 2015 or newer.

I don’t suggest buying a fancy car just to do Lyft LUX. I suggest getting the most fuel-efficient and reasonably priced car because the margins of this business are too low to justify the extra costs and LUX request are rare.

A scary story that hit me hard:

“[Mohamed] Jaouhari was reportedly on his way to a pickup for Uber when he swerved to avoid what he thought was an animal in the road. When he stopped, he realized it was a person and called the police. He parked his car horizontally to protect the passed out teenager from traffic.”

First of all, hats off to Mohamed Jaouhari for paying attention and stopping to call the police. This story reminded me of two instances where I experienced drunk people laying on the road late at night and my near misses in running them over. I couldn’t fit it all here so I wrote an entire post instead.

Check out: The Third Man On The Road

Warning: The linked posted above may include content that some find graphic or disturbing. Don’t read it if you hate scary stories.

The California Assembly passed a bill called AB5 that would turn gig-workers from independent contractors into employees once it gets passed in the State Senate. This comes roughly a year after a CA Supreme Court ruling called Dynamex, which applied a 3-part ABC test to determine the employment status of workers. This test would very clearly make drivers employees.

However, there has been little action from government entities to enforce the Dynamex decision:

“NBC News sent requests for comment to the city attorneys for Oakland, Los Angeles, Sacramento and Fresno, and none responded. The California Attorney General’s Office referred inquiries to the Labor Commissioner’s Office, which said in a statement that misclassification was a “very serious” and ongoing issue, but would not say whether the agency was targeting Uber or any other gig economy company.”

It seems like government entities are avoiding the issue.

Gig-companies instead seem to have opted not to comply with the Dynamex decision. My bet is that their strategy right now is lobbying CA State Senators to get their workers added to a special exemption list in AB5.

Uber says it will kick off riders for low ratings (CNN)

Uber has begun deactivating riders in the US and Canada with a significantly lower rating than other passengers. Uber hasn’t been clear on exactly what that rating cutoff is though.

“The announcement comes as Uber is expected to release a safety transparency report this year, which will include data on claims of sexual assaults and other safety incidents by drivers on its platform. “

I welcome this move by Uber. Bad passengers are a huge risk to safety and they tend to eat up time and money. Hopefully it will help us see less incidents like this.